5 degrees. This temperature was in Warsaw when I called Uber, which was to take me to Chopin Airport. When I got off the Boeing in Bangkok, it greeted me 37 degrees in the shade.

A 42-degree temperature difference is an unforgettable experience. Not that it would be a big shock, as some say. It was a very pleasant feeling, because in February I was tired of winter. It was worse with the way back, when after two weeks of heat we had to get back into the freezer (so cold Poland seemed to me then). Suddenly in a dozen of hours everything changes – time, climate, weather, people …

A sun I have never seen before.

My holidays were in February – it’s a dry and warm season in Thailand (the other two seasons that occur there are hot and dry season (March-May) and hot and humid (June-October)), which lasts from November to February. The peak of the season and the perfect time for a trip, if you look for the weather straight from the postcard, with a beautiful, blue sky at the forefront. Of course, you also have to be prepared for a larger number of tourists.

This is my first but certainly not the last encounter with the orient, culture of Asia, its smell and taste. The first thing that Thailand welcomed me was the hot blast of air coming out of the gaps between the plane and the airport sleeve. The second was chaos. Huge and ubiquitous chaos. After border control and baggage recovery (still at the airport) I wanted to buy a card with Thai internet. It was difficult to communicate with the sellers in those stores, their knowledge of English was below average (a standard for this country). Then we headed to the subway to get to the center, where we were supposed to catch a bus to the hotel. And here the first problems began.

Google Maps helped us to find the bus stop. Without it, it would be hard to say where to wait for the bus. Even with the help of the application, we did not know where to stand. Despite the busy, wide street, the stop was not separated. What’s more, it was separated from the street so that you had to go through concrete pillars to get to the bus. If it arrive. The line, which runs every 10 minutes, made us wait for over an hour. We were afraid that he would not come at all, because the locals at the bus stop told us that this line sometimes does not run all day long. Lottery.

It might seem that traffic, warranty of people and various vehicles can be overwhelming. None of these things. It all fits perfectly into the atmosphere of the metropolis.
In my opinion, there is one thing that spoils it – these are cables and wires present absolutely everywhere. Wherever you look – wires. From the hotel window, a view of the cables, from the restaurant view of the cables, a picture of the landscape with a view of the cables, on the sidewalk you can also trip over the cables.

There are several reasons for this. More official – it is faster and cheaper. Current was always delivered to the buildings at the end.

It is also much easier to combine new homes in this way. Secondly if there is a flood city is not suffering from the lack of electrocity. Less official is that the Thai people do not like burying underground. Thus, for example, the greater part of the underground built above the surface. 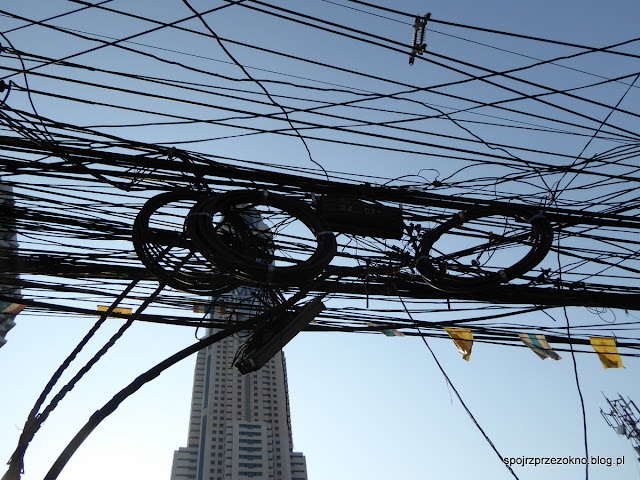 Pictures of wired Thailand thanks to the favor of spojrzprzezokno.pl

There are literally MILLIONS of Tuk-Tuks in Bangkok. The word “Tuk-Tuk” is heard on every corner. They are everywhere. In theory, these vehicles are cheap and fast transport. In practice, this is a tourist attraction that has nothing to do with cheap price. Try it for sure – it is very pleasant and unique experience. And when you have some extra money left, you can ride. It is worth haggling (this applies to the whole of Thailand). I did not get into the tuk-tuk until the driver lowered the price by half. It is always inflated, especially if you are tourist.

I consider transport by these vehicles to be extremely innovative and it would work well in every metropolis. Especially the one where the whole year is warm. In Warsaw, for example, you could use these vehicles in the summer and leave it in the garage (Veturilo works the same way) or even buy a special version of such vehicles which are adapted to the winter conditions. Such a means of transport is very cheap and fast. I wonder why a similar solution in Warsaw has not been popularized. Even in the form of scooters.

Transport in Thailand in a nutshell: mass scooters, tuk-tuks everywhere (or Songthaew in some parts of Thailand), few trains and some more buses (there are abundant in Bangkok; there are plans to introduce smart buses, whatever it was supposed to mean), taxis and private cars, subway. Not forgetting about ferries and ships between the islands. Of course, in addition, for slightly richer, famous travel by airplanes inside the country. The well-developed network of airports and the offer of national and regional guides enable efficient mobility within the country.

There is a very high culture on buses or trains. Nobody pushes, everyone is nice and (See here what happened to us on the train in Thailand). In the underground it is highly inadvisable to push yourself, you can get into trouble for it. And that’s roughly. I will tell you more aspects and interesting facts about transport in Thailand on another occasion.

Thailand is a country very I do not know … It’s really hard to say. Next to huge skyscrapers, about which Warsaw did not even dream, slums, homeless, resident of cartons on the streets. It is full of gold, it is full of dirt. It’s all mixed here. Speaking of wealth, I do not mean only the dripping temples. Ordinary hurdles, balustrades, lanterns can be decorated with gold. I know that to a large extent they are simply painted with golden paint, but simply poverty and wealth are their very good neighbors.